How can you tell if you have a fake or counterfeit polymer banknote? You can do this simple trick to find out. First simply crush the banknote with your palm like squeezing it into a ball and then let it go immediately. The note should springs back immediately. If not, then you may have a fake note in your hand.

Here I have a complete collection of all Australian polymer notes (single note) issued since 1988, including all commemorative / numismatic notes, joint issues and special serial numbered issues. The only set that I do not have, at the moment, is the 1998 $10 Portraits AA98/AB98 (with or without frame). This $10 Portrait set was a failure at that time and the series was later withdrew as it was not popular among collectors. The price was not right then for me too and that was why I didn't buy them. It was NPA intention then to release all portrait sets on a yearly basis starting with the $10 note and collectors were also given the opportunity to get them all with matching serial numbers too. Unfortunately this was not to be the case.
Did you know that the Australia first polymer notes series are designed in such a way that the portraits of female and male are alternated, with serial numbers on the front and signatures on the back, ie $5 Queen Elizabeth the ll / Parliament House, $10 AB Banjo Patterson / Mary Gilmore, $20 John Flynn / Mary Reibey, $50 Edith Cowan / David Unaipon, $100 Nellie Melba / John Monash and $5 Federation Henry Parkes / Catherine Helen Spence. Of course only the normal $5 note has one portrait on the front and none on the back.

Also did you know that, the following were some of the names proposed for the new Australian currency back in the 60s when it was converting from Pound Sterling to Decimal (converted on 14.02.1966) - Boomer, the Digger, the Dinkum, the Emu, the Kanga, the Ming, Oz, the Quid, the Roo and Royal. Fortunately, the Dollar won the battle! Just like New Zealand, they too had proposed few other names for their currency, like the Fern, Kiwi, Zeal before they too accepted dollar on 10.07.1967. 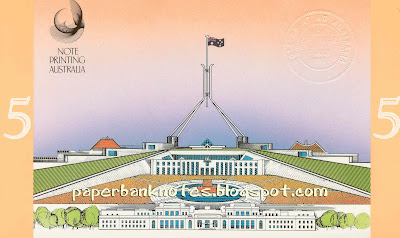 Australia 1992 Embossed Commemorative First and Last folder. Two varieties were issued for this commemorative folder - Embossed and Standard Souvenir folders. There are no difference between the notes for these two folders, however the only difference is the folder cover for the Embossed set which is printed with a raised seal on the top right hand corner and it reads as - "NOTE PRINTING AUSTRALIA 1ST DAY OF ISSUE 7 JULY 1992". Quantities issued for these folders were 17,000 for the embossed set and 30,000 for the standard souvenir set. The polymer note is printed with green serial numbers. Original issue price for the embossed set was $20 and $19 for the standard souvenir set.

you are visitor no: