How can you tell if you have a fake or counterfeit polymer banknote? You can do this simple trick to find out. First simply crush the banknote with your palm like squeezing it into a ball and then let it go immediately. The note should springs back immediately. If not, then you may have a fake note in your hand.

Here I have a complete collection of all Australian polymer notes (single note) issued since 1988, including all commemorative / numismatic notes, joint issues and special serial numbered issues. The only set that I do not have, at the moment, is the 1998 $10 Portraits AA98/AB98 (with or without frame). This $10 Portrait set was a failure at that time and the series was later withdrew as it was not popular among collectors. The price was not right then for me too and that was why I didn't buy them. It was NPA intention then to release all portrait sets on a yearly basis starting with the $10 note and collectors were also given the opportunity to get them all with matching serial numbers too. Unfortunately this was not to be the case.
Did you know that the Australia first polymer notes series are designed in such a way that the portraits of female and male are alternated, with serial numbers on the front and signatures on the back, ie $5 Queen Elizabeth the ll / Parliament House, $10 AB Banjo Patterson / Mary Gilmore, $20 John Flynn / Mary Reibey, $50 Edith Cowan / David Unaipon, $100 Nellie Melba / John Monash and $5 Federation Henry Parkes / Catherine Helen Spence. Of course only the normal $5 note has one portrait on the front and none on the back.

Also did you know that, the following were some of the names proposed for the new Australian currency back in the 60s when it was converting from Pound Sterling to Decimal (converted on 14.02.1966) - Boomer, the Digger, the Dinkum, the Emu, the Kanga, the Ming, Oz, the Quid, the Roo and Royal. Fortunately, the Dollar won the battle! Just like New Zealand, they too had proposed few other names for their currency, like the Fern, Kiwi, Zeal before they too accepted dollar on 10.07.1967.

Commonwealth Scientific and Industrial Research Organisation (CSIRO)
Celebrating 80 years of inventions and successes. This note is printed on the same material as those polymer notes used in Australia. Note issued as a novelty and it comes with a wallet folder.
Obverse 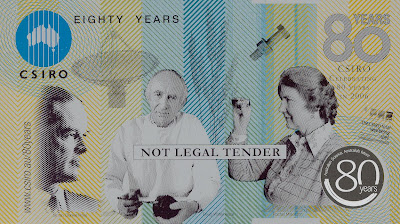 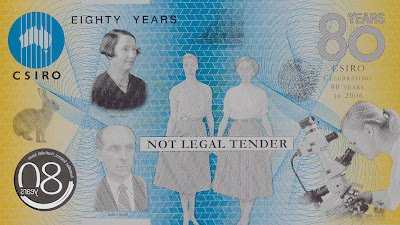 CSIRO is the national government body for scientific research in Australia. It's origin date from the early years of World War I where the Australian Government established the Advisory Council of Science and Industry as the first step towards a 'national laboratory'. Several years later the agency was reorganised and in 1926 established the Council for Scientific and Industrial Research (CSIR). The aim of the CSIR was to carry out scientific research to assist primary and secondary industries in Australia, mainly in the farming, mining and manufacture sectors.
Between the 1930s and 1940s, research was conducted in the fields of; -
- animal pests and diseases;
- plant pests and diseases;
- fuel problems, especially liquid fuels;
- preservation of foodstuffs, especially cold storage;
- forest products.

During the World War II (1939-1945), CSIR involved in the research to assist the Australian Defence Forces, in areas such as radar.

After the war, it expanded it's research to include areas such as building materials, wool textiles, coal, atmospheric physics, physical metallurgy and assessment of land resources.
In 1949, CSIR ceased all secret or classified work for the military and was renamed CSIRO, the Commonwealth Scientific and Industrial Research Organisation. Since then CSIRO has expanded its activities to almost every field of primary, secondary and tertiary industry. These include research into the environment, human nutrition, conservation, urban and rural planning and water.

Some of CSIRO’s scientific breakthroughs include:

Today, CSIRO is one of the largest and most diverse research agencies in the world.

In 2006 CSIRO celebrates its 80th anniversary, and as such the above commemorative "notes" were printed. Whilst I do not know how many of these were printed, it is believed in the vicinity of 6,000 plus as every staff at CSIRO, is presented with one each.

Footnote: I got this note at a very affortable price. Since I got this note in 2006, I have seen dealers selling them in excess of A$75 each. In my opinion, and in case you are looking for one, this is not worth the money. It's more like a thin plastic cardboard than a banknote. Despite having one in my collection, I have no idea where I have stored this note. Needless to say, this is not importance enough for me to store this in a secured place!

you are visitor no: